A Second Chance For Plastic 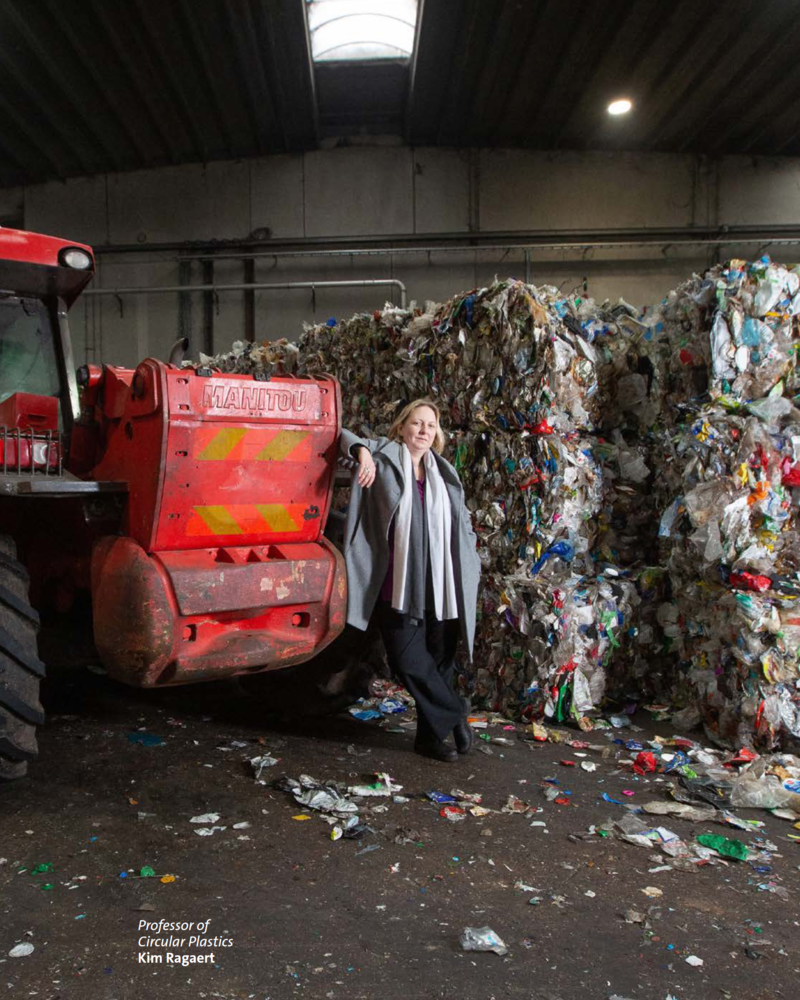 If we were to replace plastic with paper or glass, would the environment benefit? Surprisingly, no, says professor of Circular Plastics Kim Ragaert. She is calling for an alternative approach aimed at increasing awareness of and knowledge about recycling. “We should see plastic as a raw material rather than as waste.”

­Many people think they are being environmentally conscious by choosing a glass instead of a plastic bottle, or a paper instead of a plastic bag. In her TED Talk ‘Plastic Rehab’, Kim Ragaert points out that opting for the plastic variant can be the better choice. The process of producing and recycling plastic often has a smaller ecological footprint than that of materials such as glass and paper. “Plastic is not all bad,” she says. “But we have to be conscious of how we use it.”

Even as a child, Ragaert was curious about materials, how they are put together and how we can reuse them. Of particular interest was that highly versatile material: plastic. So it is perhaps of little wonder that she was recently appointed professor of Circular Plastics at Maastricht University. She describes her new employer as a young, dynamic institution that offers abundant opportunities. Within her research field, too, opportunities abound. “When I started this research around 10 years ago, neither industry nor academia had much interest in topics like recycling and sustainable plastic. NewEuropean legislation and increased social pressure have since triggered a sea change. Recycling has become a hot topic, but the research is still in ist infancy.”

Victim of its own success

Why does plastic have such a bad image, especially when research shows that it’s not all bad? “A lot of disposable stuff is made out of plastic, so we’ve come to see it as ‘junk’. Plastic pollution is also highly visible. Not to mention the negative stories doing the rounds in the media, microplastics affecting our health and the like, though as yet there’s little scientific evidence to back that up.” Plastic is, as it were, a victim of its own success. “It’s lightweight, strong and versatile, which makes it economically appealing. But there are many different subtypes of plastic and, in a practical sense, therein lies the rub. Good plastic recycling is much more complicated than just tossing everything together into the recycling bin.”

Naturally, we need to avoid creating a great deal of additional waste. Ragaert regrets measures such as the European Single Use Plastics Directive, which prohibits disposable products from being made of plastic instead of banning them altogether. This gives people a ‘licence to litter’ by implying you can just use alternatives like bamboo straws or biodegradable soup cups once and then throw them out. That way they’re not recycled and we end up polluting the environment even more. I’d rather see a European Single Use Product Directive — let’s reuse all our products more often, taking plastic as an example. We should see it as a raw material rather than as

A stronger commitment to plastic recycling would require a different, more responsible mindset. “For starters, product developers will have to design products that take the recycling process into account. The government can encourage this through legislation and subsidies. In addition, we have to raise awareness; consumers need to know that plastic is a valuable material, that we can really do something with it as long as we reuse it properly. Then demand will eventually arise again automatically, and it will become easier for product developers and retailers to use plastic again. Often they shy away from it because consumer pressure is high and plastic has a bad image.”

Recycling should result in less new waste, but what do we do with the plastic that is already polluting our oceans? “Plastic that has long been exposed to UV light and seawater can be even more difficult to process. Fortunately, there are innovative startups that have succeeded, for example, in turning discarded fishing nets — which make up a large part of marine litter — into new fishing nets. In any event, plastic waste has to be removed from the sea, of course, and we have to avoid creating more marine pollution. Globally, the Western world should take responsibility by helping to develop the collection and recycling infrastructure in countries where a great deal of litter is currently generated. That way, packaging will find its way into the circular economy there too.”

Ragaert would rather contribute to a better world than help companies turn a profit. “That’s why I chose academia; I want to do my part through my research.” But she also tries to set a good example in everyday life. “I sort my waste, reuse products wherever possible, drink from the tap or from a refillable bottle, buy products made from recycled plastic, replenish soap from large bottles instead of buying small ones. Every little bit helps, and if we all contribute, we can generate a critical mass for all materials. If people stop buying those cute little 0.15L soft-drink cans or 20g of pre-packaged nuts, they’ll soon disappear from the shelves.

Kim Ragaert has been professor of Circular Plastics at the Faculty of Science and Engineering since September 2021. Her background is in mechanical engineering and materials science. She obtained her PhD in Engineering Sciences at Ghent University, then worked as a researcher, assistant and associate professor and coordinator of projects such as C-PlaNeT. In 2020 she was awarded the prestigious title of European Plastics Recycling Ambassador of the Year.