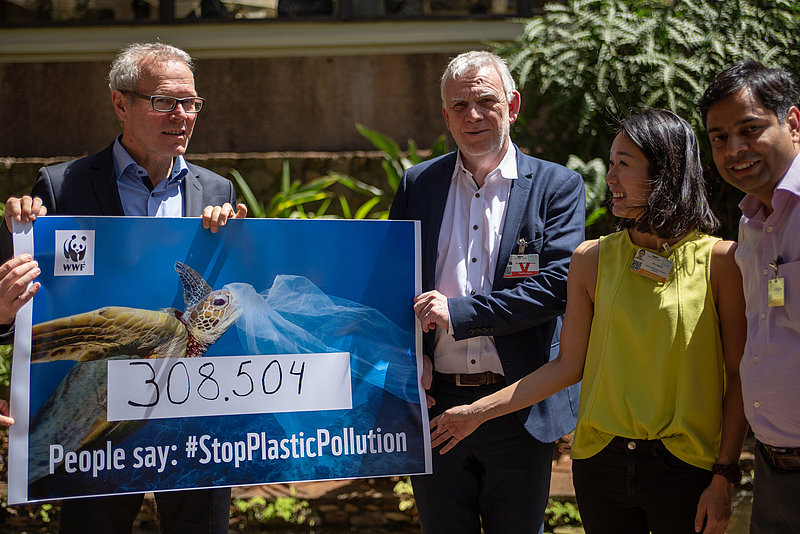 ©opyright by Alois Vedder / WWF
He was already present at the UNEA4 Assembly in 2019: Dr Alois Vedder, on the left, was one of a few NGO representatives at the last UNEA5 Assembly, where the globally celebrated Plastics Convention was adopted.

Six months have passed since the United Nations Environment Assembly (UNEA) announced a global plastics agreement - a historic decision. But what has to happen at the upcoming conferences for something fundamental to change? We spoke to Alois Vedder from WWF, who was present at the negotiations in March.

The euphoria was palpable there, too. It's true: it's not every day that everyone declares their intention to pull together on such an industrially relevant issue as plastics, or even more so, to formulate clear rules. We have reached a tipping point: many people are just becoming aware of what plastics do and what is at stake here. Three or four years ago, maybe a handful of countries thought this far ahead. But we have nothing to gain from praising too early: Now, in order to negotiate and conclude a successful agreement, we need commitments for the provision of know-how, technology transfer and: Money. The role that public funds, but also private investments and the industrial structures behind them, will play in the negotiations remains exciting anyway.

Well, if a country has a large industry for the production of virgin plastic - and there are many of them in the world - they are unlikely to want oil volumes and plastic production to be regulated. They would delay decisions as much as possible and, if possible, block them. After all, it is certain that each country's vote will be equally weighted, whether it is China or Burkina Faso: one country, one vote.

That is why the preparatory conference for the international, intergovernmental negotiations was already scheduled for the end of May 2022, where the framework conditions were discussed and partly negotiated. The division of the working groups, the organisation of the plenary discussions, the order of the topics - sounds trivial, but all this is important and has an influence on whether the decisions go in favour of the oceans or in favour of the interests of individual large economic nations. For example, there are countries that would like everything to be decided by consensus - that is, it requires the agreement of all countries. This means that it not only takes forever until the last country - i.e. every oil-producing country - has agreed, but also that compromises have to be negotiated with all these countries down to the last detail, which benefit their economic interests and thus not primarily the actual cause, the oceans. No final decision has yet been made on the structure of the conferences; this will happen at the end of November 2022 at the first major and "real" decision-making conference in Uruguay.

It would go into too much depth to discuss all the mechanisms and levers, but to go back to the example of the voting process: A two-thirds majority is one of the most commonly used voting principles for such agreements, which I also consider realistic here. The three-fourths majority is also under discussion - there it would already be somewhat more difficult to make quick decisions and formulate resolutions at the end of 2024. I am curious to see what will be decided at the next conference in November. After all, there is a good chance that a few states that are in favour of consensus decisions will have to give in.

Time will not be allowed to pass, the working groups will meet so that at least it is clear what can already be decided in November and December. There will certainly be at least a week of negotiations to make progress and to keep to the ambitious goal of formulating final decisions after five conferences by the end of 2024. 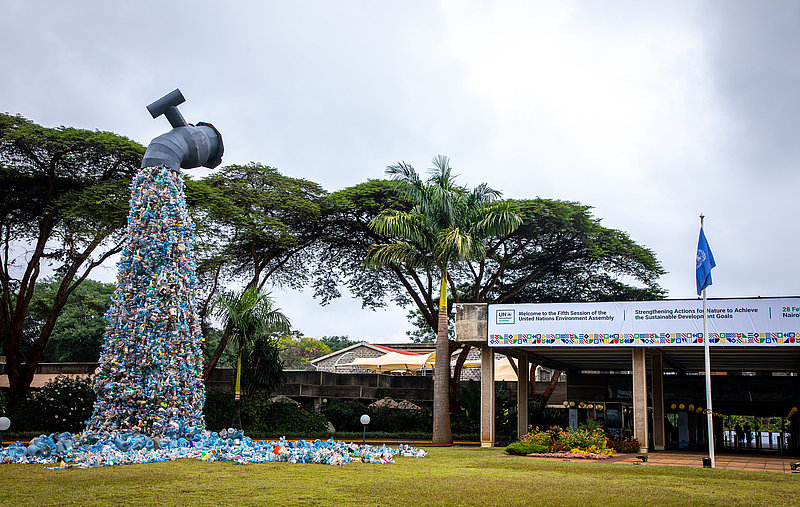 The time will not be allowed to pass, the working groups will meet so that at least it is clear what can already be decided in November and December. There will certainly be at least a week of negotiations to make progress and to keep to the ambitious goal of formulating final decisions after five conferences by the end of 2024.

Well, sanctions are the very last resort. First of all, we have to formulate legal obligations - here too, of course, some countries are trying to keep things on a voluntary basis. An interim solution would be to decide on a so-called "phase-out" for the production bans of certain harmful or superfluous products; in other words, the decisions would not have to be implemented from one day to the next, but in a gradual phase-out. This is especially true for developing countries that do not have the means to adapt their infrastructure immediately.
In all decisions, it will be important to take into account the entire value chain in producer responsibility. In the case of plastic bottles, for example, this means that not only the bottle producer but also, for example, the oil supplier and the bottling companies take responsibility and contribute financially to ensuring that the state or other actors have the possibilities to collect plastic waste directly and return it to the cycle as far as possible so that it does not end up in the environment in the first place.

...for this reason, there will have to be a large World Bank fund into which everyone pays and where and for what it is used in accordance with the resolutions is decided centrally. Globally operating companies will not be able to excuse themselves by producing only in a certain country, although they sell to the whole world. In addition, this at least goes some way to counteracting the imbalance between the Global North and South. Countries from the rich North are among the big producers, while a large part of the pollution is generated in countries of the Global South, because the infrastructure for collecting and recycling plastic waste is incomparably weaker. So that's where most of the money should go, and all actors in the complex value chain should have to take responsibility.

Here, too, it is important to look at the whole picture! As a Central European, I have an incentive and the opportunity to return my empty deposit bottle to the cycle. And it is also incredibly important that each individual does his or her bit. But it would be naïve and arrogant to believe that this situation applies to everyone in the world. Here, the will is often still lacking and elsewhere the structures, the awareness and simply the possibility to protect the environment without having to cut back are missing. So it has to be done through incentives and political instruments, and on a large scale. However, one must not forget that there is much more behind the demand to create incentives: one must create access to information, one must lay the foundation for motivation and educate or put education at the centre. But to come back to my core point: these are parallel processes. I can be so keen to separate plastic - if seven different types of plastic are used in one package, it is simply not recyclable, my behaviour or not. This is where we need the global agreement - at the state level.

I cannot look into the future. (laughs) But it will certainly be decided that plastic - ­­­where it is not yet avoidable - must be recyclable. Not immediately, but as a long-term goal, however many years that may be. And there must be an incentive for industries and countries to develop solutions together.

A stronger shift towards the circular economy is of course an important issue, but the lever cannot be pulled fast enough. So here, too, it is a parallel process. The tenor is clear: in the long term, we will not be able to avoid producing less plastic in general, especially petroleum-based plastic. And at the same time, the plastic that we will probably be dependent on for decades to come must be managed in a cycle.