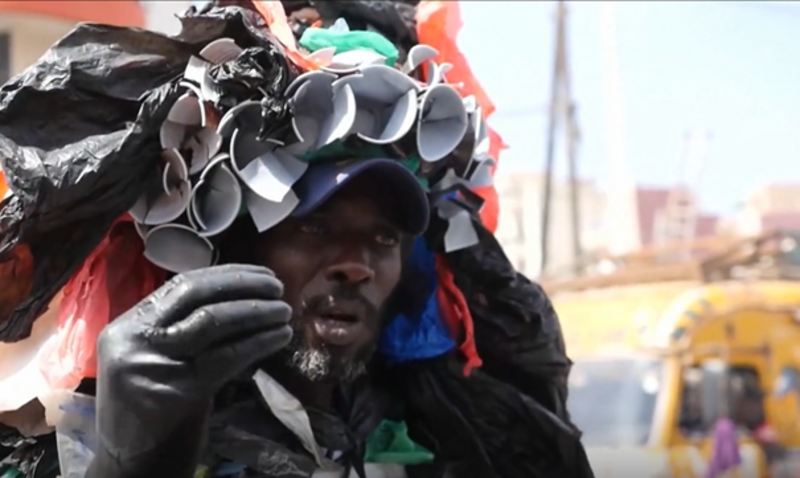 ©Copyright by Modou Fall/lesenegalquejadore
"Non aux sachets plasiques" - "no to plastic bags": Modou Fall is now known far beyond the borders of Senegal as the "plastic man" because he tirelessly fights against environmental pollution in his country, always dressed in plastic.

In our new series "Action From the Heart - Faces of Change," we portray people around the world who have made extraordinary achievements in the fight against the plastic pandemic. We start with Modou Fall from Senegal - known there as the iconic "Plastic Man".

About our new series: we scientists focus on facts and figures. That is right and important. But to spark change, we have to speak to people from the heart. That's why, we're featuring from now on people from around the world who are leading by example and have done extraordinary things in the fight against the plastic pandemic. You have an idea who we should definitely portray? Write to us at mixup@everwave.de

Modou Fall reaches into his large gym bag late one afternoon and pulls out a large, colorful and futuristic-looking suit, swings the bulky garment over his shoulders - and transforms into the person known throughout Senegal only as the "Plastic Man."
The 48-year-old Senegalese has made himself a suit out of waste bags and cups to draw attention to the devastating effects of plastic. With his NGO "Clean Senegal," he organizes events at which he appears in his plastic outfit.
He never misses an opportunity to gently lecture his countrymen - and more recently people around the world - on environmental issues. He is often seen walking the streets with a sign emblazoned on his chest that reads "No to plastic bags."
Modou Fall's story has gone around the world. Last year, Deutsche Welle (DW) reported on his work, as seen in the small video below. And recently, even the New York Times reported on the Senegalese's work, which is far from complete.

Senegal is one of the poorest countries in the world. In 2020, it ranked 166th out of 189 in the Human Development Index, which measures and compares poverty worldwide. Today, the West African nation depends on loans from richer nations and international development cooperation. Senegal was once a prosperous state in Africa, but since the 1980s the coastal state has become increasingly dependent on a few raw materials such as peanuts, phosphates and fish; at the same time, the population grew rapidly and the state became increasingly indebted.
At somewhat the same time, plastic consumption in Senegal grew dramatically. Although the country is just about half the size of Germany and has a population of only 17 million, according to studies it is one of the countries that pollute the world's oceans the most with plastic. Like many poor countries, Senegal has hardly any waste recycling facilities; at the same time, most of the population lives on the coast - some of the waste ends up in the ocean without a detour. It is true that some plastic products have been banned since 2020. But in fact, plastic consumption appears to be continuing to increase.  One study estimates that by 2025, more than 700,000 tons of uncontrolled plastic waste will be produced. This compares to about 337,000 tons in the United States. People are hardly complying with government measures.

Modou Fall has made it his life's work to change that. "The opportunities are there, but people's awareness is not," he says "even though it's getting better very slowly, barely noticeable."
For more than 15 years, he's been crisscrossing the country to promote the same old cause in neighborhoods, supermarkets and schools: Less plastic - plastic harms the environment - plastic harms us all. If he sees people shopping at a market stall and is about to put fruit or vegetables in a plastic bag, he approaches them and holds out a paper bag instead. "Here, you better take this one and give me the plastic bag, it can do a lot of damage," he said, tying the plastic bag to his costume, which thus becomes more and more colorful, more and more crazy.

And that's not all: with his NGO, he also plants trees in the capital Dakar. Again and again, it is he who organizes cleaning and tire recycling campaigns. From the collected plastic waste, Clean Senegal made bricks, paving stones and public benches. Fall hopes that in the near future, he will not only be so well known that people in Senegal and more and more media around the world will know him - but also that more and more of these people will implement his advice and follow his example: Clean up Senegal.