"Hopes in bioplastics are justifiably high, but not a panacea" 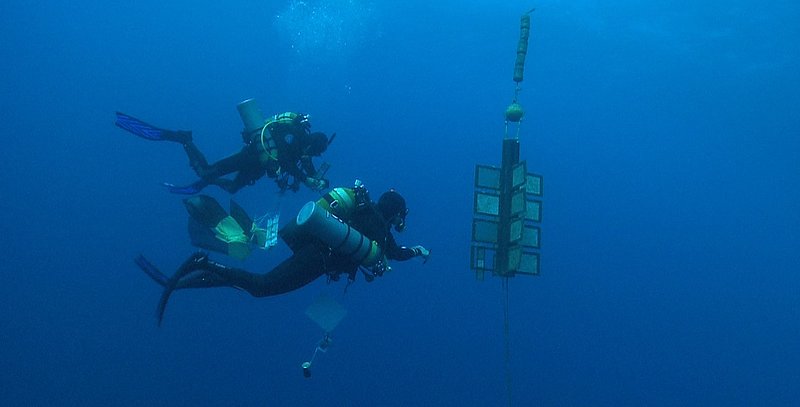 ©HYDRA/C.Lott.
The picture shows Miriam Weber and her team setting up an underwater experiment to simulate floating plastic.

Dr Miriam Weber from HYDRA Marine Science is investigating how bioplastics behave in marine waters. Initial results show: The new plastics are far from being an environmentally sound alternative. Now, however, the team is working on a method that would make it easier to assess the danger posed by bioplastics in the future.

No, for a turtle, a net made of bioplastics is just as deadly. A biodegradable net will not degrade in the time it takes a turtle to hold its breath. That would be nice, of course: plastic that disappears after hours or days. Under good conditions, it is possible so far that it takes a few weeks. This is where use meets the 'end-of-life' situation; after all, the plastic is also supposed to fulfil a certain function. How long biodegradation takes in the environment depends on the environmental conditions and also on the material. For example, the same material can take years in a cold environment and only a few weeks in tropical areas until it is completely degraded.

And rightly so. The focus here should be on three applications. First: where we have an intentional input, for example in seed covers in agriculture or fireworks. Secondly: where they have a high risk of loss, for example fishing articles such as nets and boxes. And thirdly, where an input happens through sheer use, for example in the abrasion of road markings, our clothing and shoe soles. But here we should first define what exactly we are talking about. Not all bioplastics are the same. Unfortunately, this is often oversimplified in public. First of all, there are plastics that are based on renewable raw materials and those that are biodegradable. We call both bioplastics. For me, 'bioplastic' should be both, bio-based and biodegradable. The ones that are most interesting for the protection of the environment are the ones that also degrade effectively there. It is important to understand that environmental conditions influence the rate of degradation, and that these are varied. The values fluctuate extremely, sometimes it takes a few weeks, sometimes years.

Well, not all seas are the same. Plastic is exposed to a wide variety of conditions there. It depends, for example, on whether the material lands on the bottom, "floats" in the water column or lies on the beach. On the seabed, temperatures are relatively stable, but not on the beach. On the beach, the plastic is sometimes covered with water, sometimes not. Sometimes it is exposed to sunlight, sometimes not. The salinity also fluctuates. And this of course strongly influences the ability of the microbes to break down plastic and remineralise it completely. A current example: there are bioplastics that completely decompose in a few weeks on the seabed in tropical latitudes. But with the same materials on the Mediterranean seabed, we see that it takes several months. And if it is a somewhat more complex plastic, it also quickly takes several years.

One tendency is that it is fastest on the seabed. But there is another aspect that is important, namely the availability of nutrients. A microorganism that degrades plastic needs not only the carbon in the plastic, but also nitrogen compounds, phosphorus compounds and other elements. If only one factor is limited, the calculation no longer works; degradation proceeds more slowly.

...exactly. Nature is diverse and complicated.

Exactly. We take a pragmatic approach and say: Let's pick out the conditions that are most relevant because they occur frequently. There we determine the degradation rates experimentally and use them to develop a model that calculates estimated values depending on all the factors mentioned above. This would enable us to determine in the future, for example: A commonly used bottle made of PHA with a standardised thickness takes between two and ten months to degrade, depending on the ocean conditions - although the numbers in this example are still arbitrary. The model could then roughly distinguish between three environments: favourable, medium-favourable and poor conditions. In a second step, we also want to apply ecotoxicological tests to find out how degradation affects the environment. In addition to field experiments, we are investigating relevant conditions in tank experiments in which natural influences can be simulated and we can thus obtain more results. 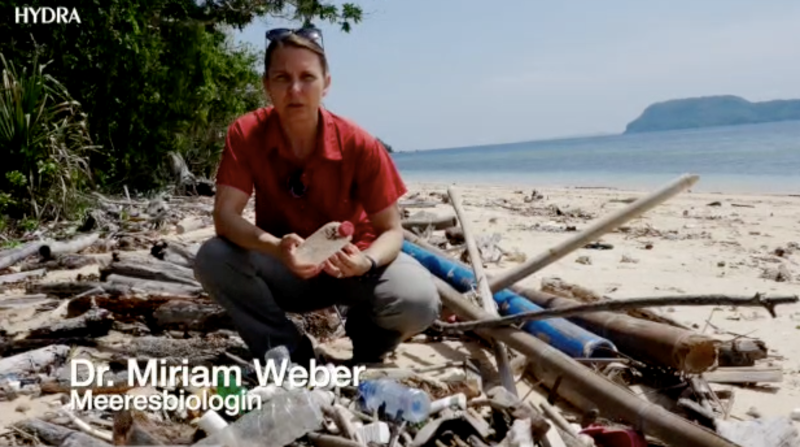 In our investigations so far, we have found that especially those with starch and polyhydroxybutyric acid degrade well. But these are not conclusive results yet. We are also continuing to look at cellulose and PLA and also natural materials such as banana leaves or wood. At the moment, we are still working with pure materials and only a few simple mixtures, or not yet with products that are often composed of different types of plastic. But we can already say that PLA in its pure form is very, very difficult to degrade in the environment - if at all, it takes several years to decades. This is different in an industrial composting plant, where it is constantly very warm and there are many nutrients and oxygen. Temperatures of 60°C do not exist in the environment and the results from a composting plant cannot be transferred to nature. It is problematic for PLA in that it is again extremely useful and flexible in functionality, which is why it is so widely used. I am very excited to see what materials research will produce in the future. Mixtures can enable the degradation of PLA through the addition of another substance that changes the conditions directly at the PLA compounds in such a way that degradation can begin.

Yes. First of all, of course, you have to see: All plastic, no matter how well degradable or what raw materials it is made of, is waste. It does not belong in the environment. It would be fatal if the view continues to prevail that we don't need to worry about plastic in the environment as long as it is biodegradable. Nevertheless, there are areas where we can only prevent the entry with great difficulty or not at all, or even want it. In our everyday life, these are abrasions from clothes, car tyres or shoe soles that are produced when we wear them. There are no filters that can filter out microplastics. Here it makes all the more sense to consider replacing them with biodegradable plastics. So we need a scheme that allows us to make a careful assessment. However, I still see the danger that companies use the label bioplastics for their marketing purposes. This could lead consumers to believe that they are exempt from their responsibility and can behave carelessly. So the development would even have a detrimental effect. Bioplastics threaten to become a modern trade in indulgences: I buy bioplastics, so I am - supposedly - exempt from any guilt. This applies to the end consumer as well as to the selling companies.

Exactly, and that is why, on the one hand, education is needed. Every citizen should know what bioplastics are and how they differ from conventional plastics. Hopes in bioplastics are rightly high, but they are not a panacea. Now it is up to the politicians to create a tighter framework on how to evaluate and who is allowed to label what and how. Otherwise, consumers will continue to be misled.

The "re-start-up company" HYDRA Marine Science formed in 2018 from the former HYDRA Institute of Marine Science. The marine scientists have been studying primarily biodegradable plastic in the environment for more than eleven years. HYDRA Marine Science's activities also include basic research and consultancy.