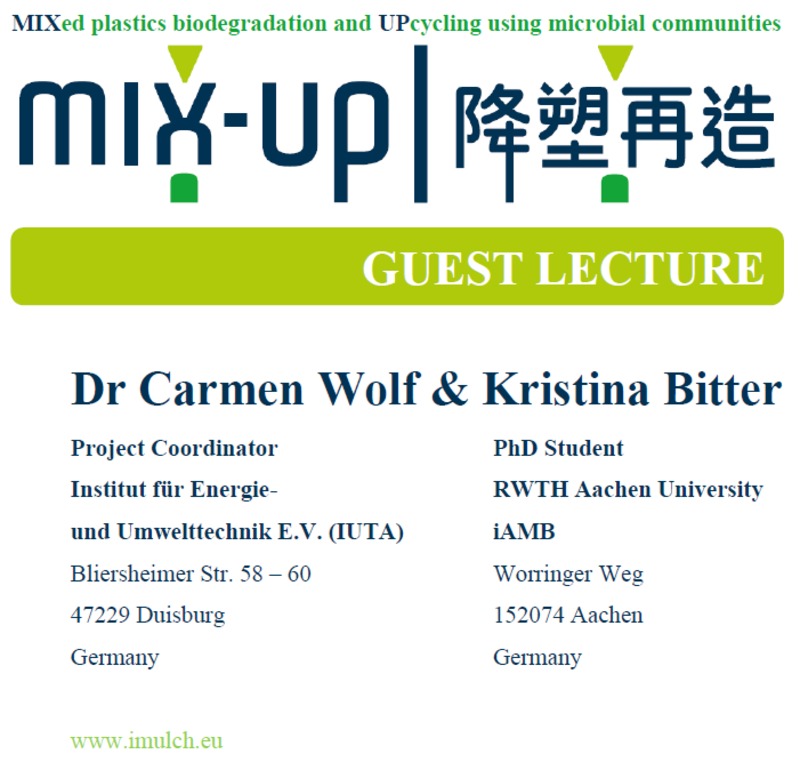 We are happy to welcome our friends Dr Carmen Wolf and Kristina Bitter for a guest lecture on iMULCH on Friday, 2nd of July 2021, at 11 a.m. (UTC +1).

The production of plastic increased during the last decades from 1.7 million t in 1950 to 335 million t in 2016 worldwide. Due to their high production volumes and their application i.a. consumer products like non–returnable packages and their durability, plastics in the environment are becoming increasingly relevant. In most cases, the focus is on plastic pollution of aquatic ecosystems, whereas the pollution of soil ecosystems (including drainage water) is often neglected.  However, it is assumed that soils can be a sink for (micro)plastics and it is obvious that plastics enter the terrestrial environment, e.g.  via dry or wet deposition, littering, application of sewage sludge, compost agrochemicals or mulch film. However, there is only limited data available dealing with the concentration of (micro)plastics in the terrestrial environment. It has been estimated that the contamination on land might be 4-23-fold larger than in oceans. One direct application of plastic in the environment is the use of plastic mulch film, which is used on agricultural soils, for example to increase the temperature of the soil for an earlier or later harvest or to decrease the amount of agrochemicals. In Europe around 4,270 km² agricultural lands are covered with mulch film and in China the covering rate is increasing from 319,000 tons in 1991 to 1,245,000 tons in 2012 with polyethylene (PE) as the most frequently used material. The PE mulch film is often modified with additives such as plasticiers, UV stabilisers and coloured pigments to generate favoured properties. The highest portion of the mulch film will be removed from the field after their use. The thinner the film the more difficult and time consuming it becomes removing all mulch film from the field after the crop cycle. For this reason, fragments of the mulch film are intentionally or unintentionally left on the field (Moreno et al. 2014) and can break down to microplastic fragments. In the “iMulch” project the effect of agricultural mulch films on organisms and soil ecosystems will be analysed in different experiments. The project is scheduled to run from January 2019 to December 2021. In the project, petroleum-based and bio-based, biodegradable plastic foils are tested. With the comparison between petroleum-based PE and bio-based, biodegradable plastic foils, it will be analysed whether and to what extent bio-based, biodegradable foils can offer an ecological advantage. However, biodegradation is often tested under optimal conditions. This project aims to analyse if these foil types are completely degraded under more realistic conditions or if they are an additional source for a microplastic contamination. In the end, a life cycle assessment will be carried out including all findings of the project to measure the environmental compatibility of conventional and biodegradable films. As a result, the research of a terrestrial system complements the investigations of aquatic systems and provides the possibility of a holistic view of plastic emissions.

In this presentation we will focus on the one hand on analytical methods which were developed to identify and quantify polymer particles in soil samples and on the other hand we will show results from an approach that deals with the “upcycling” of mulch films by bacteria. During this process plastic fragments are degraded in the laboratory by microorganisms and converted into new plastic molecules. Such molecules will then be returned to the value chain and thus increase the recyclable portion of the mulch films. Based on the results of the experiments, avoidance and substitution strategies are derived with the aim of reducing plastic film fragments in the environment.