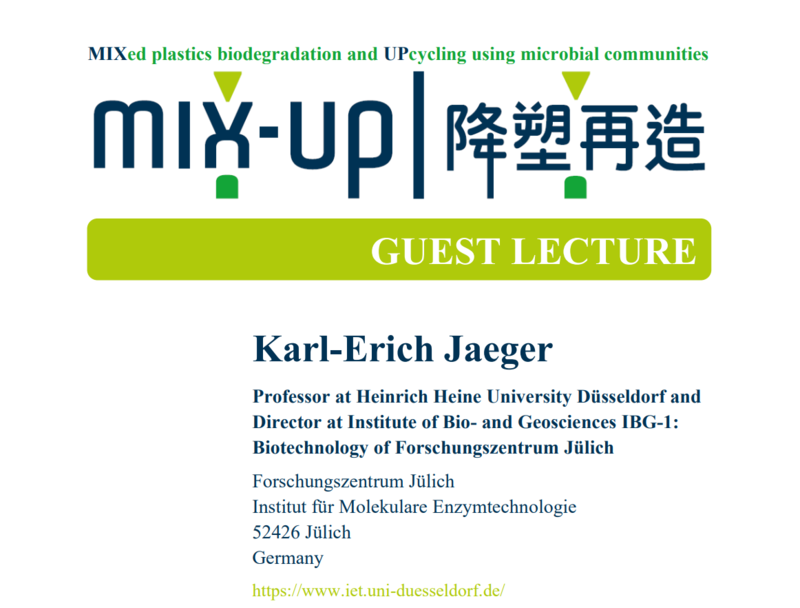 We are happy to welcome our friend Karl-Erich Jaeger for a guest lecture about Polymer-degrading enzymes from marine sources on Friday, 3 June 2022, at 11 a.m. (UTC +1).

Synthetic polymers are produced worldwide at a scale of up to 400 million metric tons annually resulting in a dramatic littering problem. Our oceans harbor patches of plastic garbage as wide as 1.6 million square kilometers. Mainly due to physical erosion, plastics breaks down to so-called micro- and nanoplastics which accumulate in the environment and may ultimately end up in humans. Consequently, removal of plastics using microbial enzymes has become a focus of recent research. We investigate the potential of marine bacteria for plastic degradation. To this end, we have developed simple screening assays with artificial polyester substrates, which can be applied to identify plastics degrading bacteria as well as candidate enzymes after recombinant expression. During a research cruise to the North Atlantic garbage patch, we have collected samples from sediment at depths between 3000 and 6000 m. Meanwhile, we have identified by metagenome sequencing and enrichment cultures various bacterial species producing putative plastic degrading enzymes. In a parallel approach, we analyzed the biotechnological potential of marine bacteria in the novel lineage of Pseudomonas pertucinogena (recently reclassified as Halopseudomonas pertucinogena). We succeeded to identify several polymer-degrading enzymes, which were expressed and characterized in comparison to enzymes known from literature. Among them, we studied in detail the enzyme PE-H which hydrolyzes polyethylene terephthalate (PET). Its crystal structure was solved and we propose a PET oligomer binding model generated by molecular docking computation.