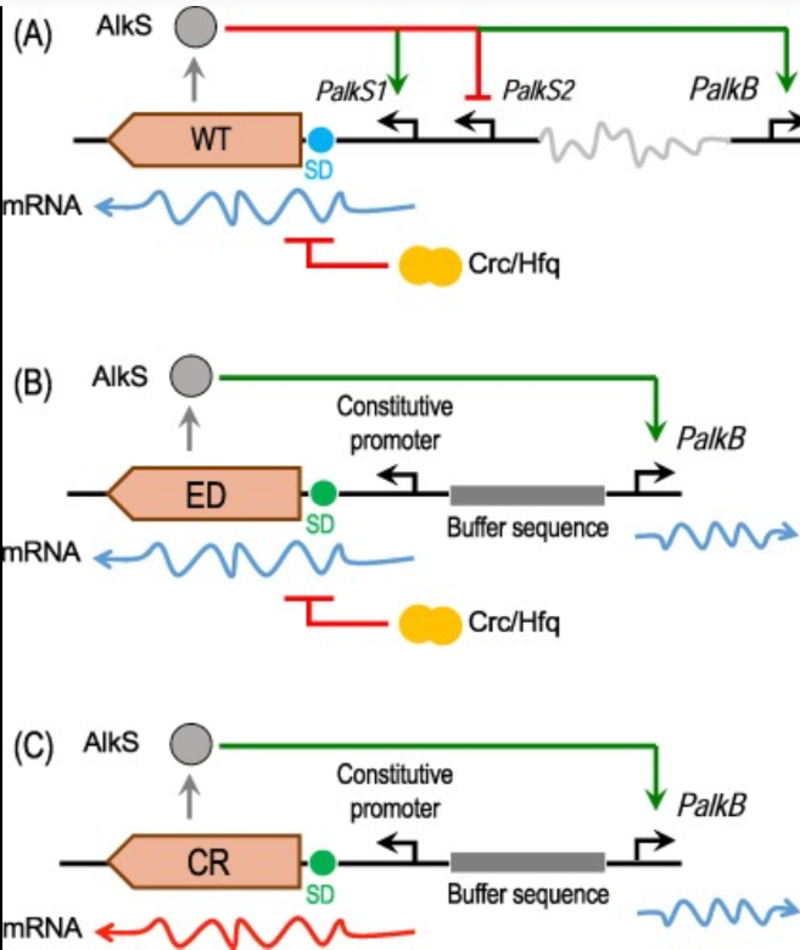 Functional segments of the naturally occurring and standardized AlkS/PalkB device.

Although inducible heterologous expression systems have been available since the birth of recombinant DNA technology, the diversity of genetic devices and their coming together in the corresponding vectors often result in a lack of reproducibility and interoperability. In an effort to increase the predictability of expression of genes of interest in a variety of possible bacterial hosts, we propose a composition standard for debugging and reassembling all regulatory parts that participate in the performance of such devices. As a case study, we addressed the n-octane and dicyclopropyl ketone-inducible PalkB promoter of the alkane biodegradation pOCT plasmid of Pseudomonas putida. The standardized expression module included an edited alkS transcription factor divergently expressed and separated from PalkB by a synthetic buffer segment. The DNA sequence of the alkS gene was modified to alleviate the catabolite repression exerted by several carbon and nitrogen sources through the Crc/Hfq complex of some hosts. The PalkB promoter and the alkS variants were then formatted as Standard European Vector Architecture cargoes, and their activity in P. putida was quantified with fluorescent and luminescent reporters. Despite considerable editing of the DNA sequences involved, the thereby refactored module basically kept the functioning parameters of the original configuration. The same qualities were inspected when the system was passed to Escherichia coli and Pseudomonas aeruginosa. We argue that the application of the compositional standard thereby implemented in the AlkS/PalkB module to other promoter/regulator pairs will enable more complex genetic programming in non-model bacteria.