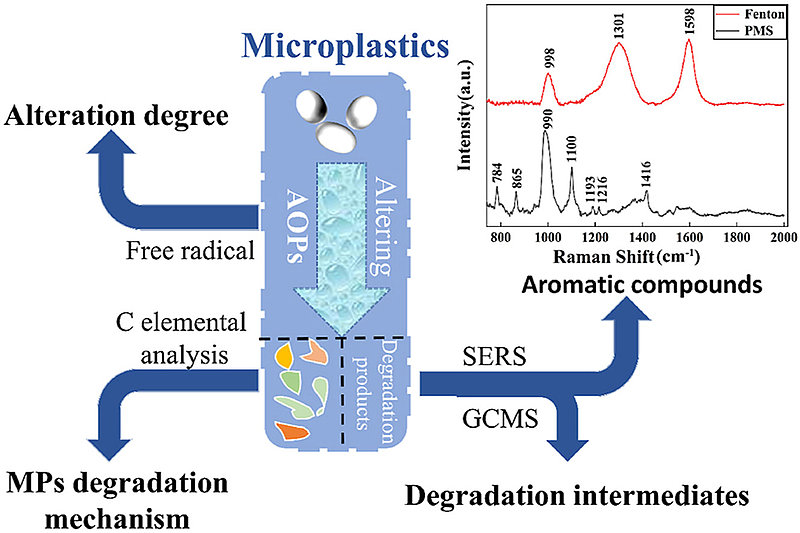 The environmental degradation and physical aging of microplastics (MP) caused by oxidateive stresshave not been thoroughly elucidated. In this study, we used different oxidative agents (Fe2+-activated peroxymonosulfate and Fenton reagents) that can form free radicals to study the degradation mechanisms of nylon 6 (PA6) and polystryene (PS) MPs. After 4 cycles of treatment, mass losses of 25.6% and 22.1% were obtained with PA6 and PS MPs, respectively. Scanning electron microscopy (SEM), Fourier-transform infrared (FTIR) spectroscopy, Raman spectroscopy, and X-ray photoelectron spectroscopy (XPS) were employed to confirm the MP oxidation, and polymer chain scissions. FTIR data indicated the existence of oxygen-containing chemical groups resulting from MPs oxidation, and chain scissions, such as CO, C–O, and O–CO. Raman spectroscopy suggested the presence of exposed aromatic groups, and weakening of the relative intensity of C–H related to the oxidation, and chain scission of the MPs. SEM imaging revealed visible morphological changes on the surface of MPs as a result of degradation. XPS indicated that the O/C ratio could be used as an indicator for the degree of MPs oxidation. By analyzing the degredation products with surface-enhanced Raman scattering (SERS) and gas chromatography-mass spectrometry, low-molecular-weight alkanes, alcohols, aldehydes, carboxylic acids derived from the derivatization of alcohols, were detected. These findings confirmed the advantage of using multiple analytic methods in tandem to evaluate the degradation of environmental MPs.