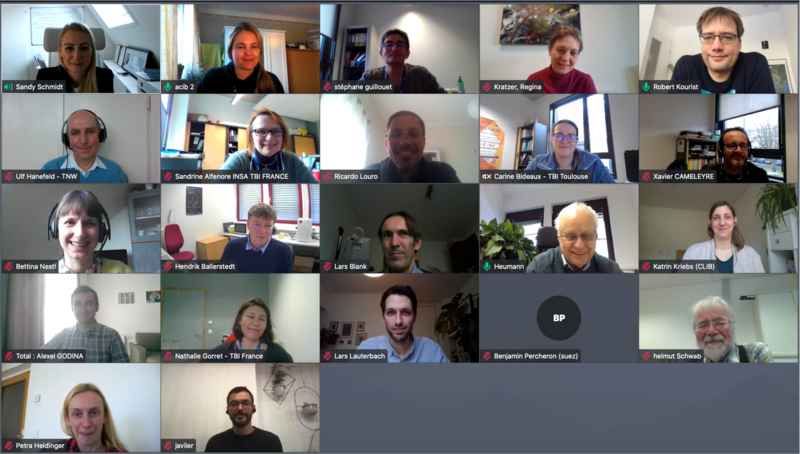 ©Copyright by ConCO2rde
The EU project "ConCO2rde" started recently - unfortunately, like the MIX-UP project, it is currently only online. But there is great hope that we will soon be able to meet again in analogue form.

The EU research project "ConCO2rde" is conducting research on one of the biggest environmental polluters of our time: carbon dioxide. The scientists are working on solutions on how to use the frowned upon CO2 in a sensible way. In an interview, project coordinator Sandy Schmidt explains how the scientists are proceeding.

You can understand it that way, but first of all I was looking for a "catchy" acronym that would catch people's eyes. When I then confronted some partners with the name, many were convinced, but once I was jokingly sent a picture of the burning and crashing Concorde as feedback. Of course, that's not what our project will come down to(laughs). The "CON" in the name stands for "Conversion" and the subsequent "CO2" of course for "carbon dioxide". The ending has no meaning, but completes the acronym.

The greenhouse gas carbon dioxide (CO2) - as most people are probably aware - is a major driver of climate change; emissions have more than multiplied in the past 60 years. This makes the search for approaches that can bring CO2 back into a cycle and use it all the more urgent - similar to what you did with plastic in your MIX-UP project.
Our approach works as follows: We use so-called autotrophic bacteria - i.e. those that do not need sugar to survive like many others - that are able to form a biomass and generally organic compounds from carbon dioxide, hydrogen and oxygen. In the long term, we would like to research how these can be produced in large quantities. The end products could then be used, for example, as animal food or for pharmaceuticals.

Yes, here you can clearly see how the individual sub-areas are linked to each other. The first step (WP1) is about developing a "toolbox" to be able to genetically modify the organism (the bacterium) and optimise it so that it can fix more CO2. The second step (WP2) is to integrate enzymes into the cell that was modified at the beginning. The necessary energy source for the enzymes is hydrogen. The third step (WP3) is finally about the aforementioned reactor design. This is not to be underestimated, because not "only" the safety aspect has to be taken into account, because a mixture of hydrogen and oxygen is explosive, but also that a fermentation under these autotrophic conditions does not lead to such a high cell density as with sugar, for example. So we are trying out different ways to increase the cell density. On the right you can see our associated approach of training eleven doctoral students in this niche of "autotrophic biotechnology". There is an enormous amount of potential here, but it is still not given enough attention. We want to change that with the doctoral students.

Of course, we need different academic partners and industrial partners. On the one hand, those who are strong in synthetic and molecular biology. After all, it is not very easy to genetically modify an organism. But also those who have special reactors, because the mixture of oxygen and hydrogen that we need for the growth of the organism can be highly explosive. And last but not least, of course, those partners who know a lot about enzymes.

That always depends on the requirements. It will certainly be challenging to bring the technology to the point where it can be used industrially in such a short time. But we will manage to develop the prototypes of the bacterial strains and set up concepts for the special reactors, which can then perhaps be applied on a larger scale in a follow-up project.