Floods In Western Germany: How Our MIX-UP Partner everwave Unexpectedly Helped With The Catastrophe 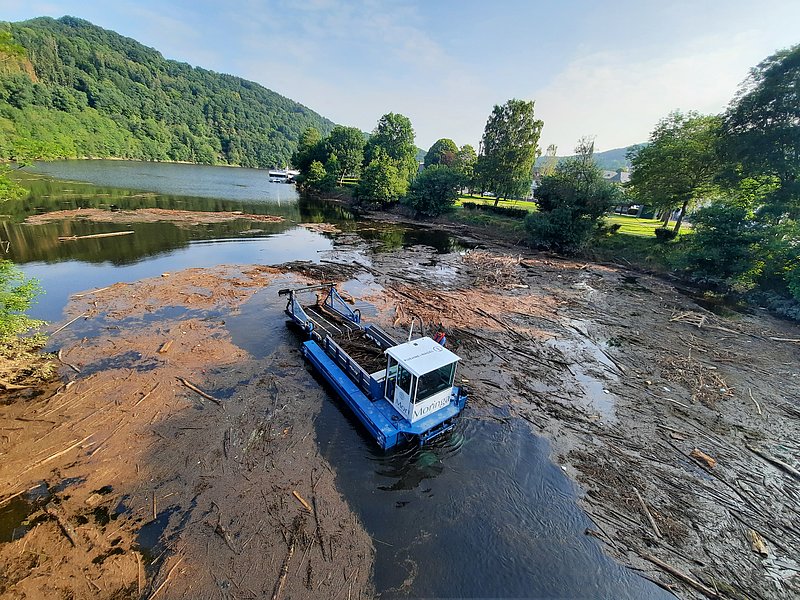 Our partner everwave is usually on the road in faraway countries to free waters from plastic waste. But then came the floods in Germany, and everwave was suddenly in the thick of it. Read here how our MIX-UP partner was able to help in the hard-hit areas.

The nimble waste collection boat "Moringa by Landmarken" has not seen plastic for a long time. The missions and assignments of our consortium partner everwave take them far away from "home" to areas flooded with plastic. Slovakia, Serbia and Bosnia & Herzegovina - that's where our partner's marine conservationists have been in recent months, cleaning up littered dams and river mouths that are impassable because of plastic.
But three weeks ago, the waste collection boat was to be used - suddenly and unexpectedly - for the first time in Germany. The occasion is a sad one: not long ago, the news was full of images of devastation; flooded houses, floating cars and streets resembling a raging river. "The impact of the extreme flooding has also affected us greatly. It is depressing to be confronted daily with the damage caused by the floods, especially with the thought of all the people who have lost so much," reports the team on site. "That's why we are happy to be helping people almost on our doorstep right now."
Like RWTH University, everwave is based in Aachen. The region, like many other places in North Rhine-Westphalia and Rhineland-Palatinate, two federal states in western Germany, was badly affected. "The Eifel-Rur water association wrote us to ask if we could help with the clean-up," the environmentalists report on their website. "Of course we didn't have to think twice about that." 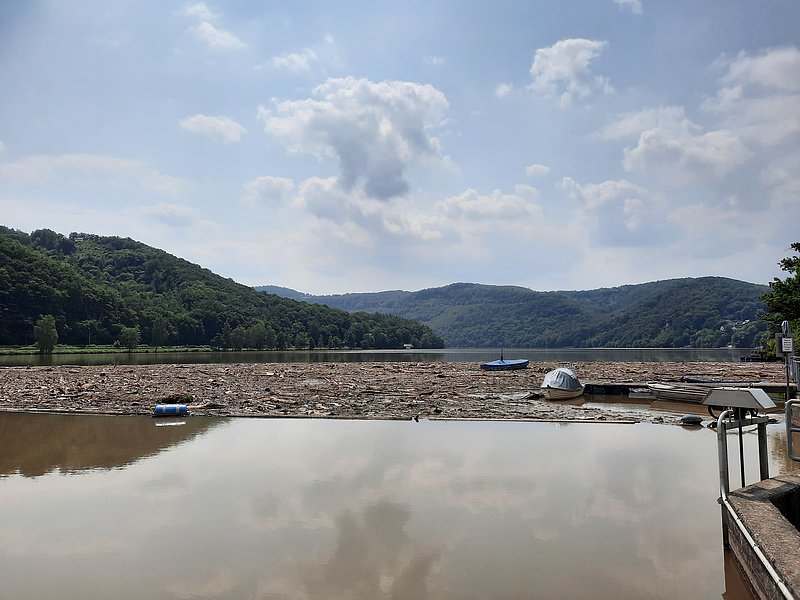 Between carpets of wood and rubbish

For a fortnight now, the team has been on the road at various locations along the Rur and Rur lakes in the Eifel to clear the dam walls, lakes and river tributaries of rubbish washed ashore. What is special about this operation? "Plastic waste is in the minority during this operation, even if we do collect plastic bottles from time to time," they report. In some places, the surface of the lake was hardly recognisable because of all the branches and large logs - and unfortunately there were also a few dead animals floating among the wood. "Only during our mission in the village Gemünd did we find a bit more plastic, because the hall of a beverage wholesaler was washed through by the flood waters and many beverage crates were carried away."
Where the boat cannot get across the water itself, it is transported by truck and crane. More locations in the affected flood zones will follow in the coming weeks, but the extent of the flooding is already apparent, he said. "We hope to be able to provide as much support there as possible."
And there is, after all, a small advantage to this "home deployment": it allows the sea protectors to further develop their technology for special situations like this. "Our drone system, which our partners from the German Research Centre for Artificial Intelligence (DFKI) have developed, is used to analyse the composition of the rubbish or wood carpets and to refine the software."