"Highly Relevant, Fun And Our Previous Project - The Ingredients of Our Recipe For Success" 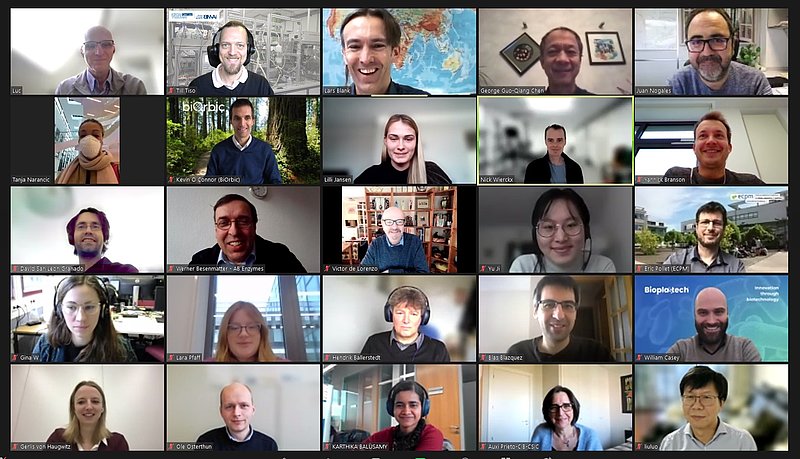 ©Copyright by RWTH Aachen/everwave
Only part of the team: The fourth meeting also had to be held online because of the pandemic. Not all of them fit on the screenshot. Nevertheless, the praise from the EU at the halfway point was good. We will continue like this - hopefully soon with project meetings in presence again!

At the halfway point, we are more successful than expected in all fields - despite Corona. What sounds like self-praise at first glance is actually a sober assessment after two years of MIX-UP. Here we report on what has helped us - and what this means for the next two years.

When our project management assistant Anna Kwetina presented the six-monthly report on the project's development to the EU officer after the General Assembly, she received feedback rarely heard in bureaucratic circles: "The project supervisor from the EU was full of praise," Kwetina recalls. "She said she was proud to supervise MIX-UP because it was by far her most successful project."

For us, that is high praise - and an actuation. How do we measure this success? Well, it's not that we want to adorn ourselves with these words. It is not for the praise, but the cause that we work. It still feels good to receive recognition. And the real benefit of this feedback for us is the underlying message that we should keep doing what we are doing. This allows us to lay the foundation for the second half. Project manager Lars Blank once discussed where the exact causes of our success lie.

Blank: "What do we take as a yardstick for success after 2 years? Well, first of all, there are more than 80 publications. That is amazing! Because: we had announced 100 for four years - I found that alone incredibly challenging. Then there is our strong public relations work: our researcher Nick Wierckx was featured on the ARTE television channel, our partner everwave is successful all over the world, and the P4SB predecessor project is even represented at the WorldExpo in Dubai. What more could you want?
I attribute these and many other things that have been so successful despite the pandemic to our team, which works strongly together. Victor de Lorenzo summed it up like this: "If you get the right people together, it will be good." But that's not all. We have been able to build on a lot of experience, many of whom came together in the previous project; we are still reaping the results of P4SB. Much longer and closer cooperation exists between groups from the CSIC in Spain and RWTH Aachen University. We now also have an invaluably strong partner from China - there are so many resources there that each site could probably do MIX-UP alone. An important interface is Ren from the University of Greifswald, who can mediate, who increases understanding even more, who works out possibilities.
The most important ingredient, however, is that everyone is keen on the project. If you have fun with the project, success is almost certain. At the moment you can't quite imagine it, but the work gives me hope that everything with the plastic pollution will work out in the end."