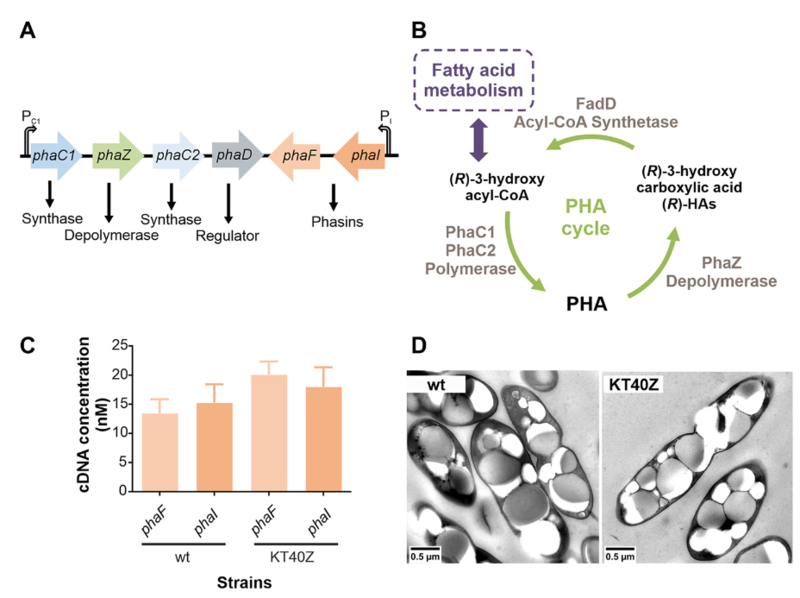 Check out the new MIX-UP publication "Synthetic Control of Metabolic States in Pseudomonas putida by Tuning Polyhydroxyalkanoate Cycle" published in the journal mBio. Congratulations to our partners Maria-Tsampika Manoli, Juan Nogales and Auxiliadora Prieto to the success!

Polyhydroxyalkanoates (PHAs) are polyesters produced by numerous microorganisms for energy and carbon storage. Simultaneous synthesis and degradation of PHA drives a dynamic cycle linked to the central carbon metabolism, which modulates numerous and diverse bacterial processes, such as stress endurance, pathogenesis, and persistence. Here, we analyze the role of the PHA cycle in conferring robustness to the model bacterium P. putida KT2440. To assess the effect of this cycle in the cell, we began by constructing a PHA depolymerase (PhaZ) mutant strain that had its PHA cycle blocked. We then restored the flux through the cycle in the context of an engineered library of P. putida strains harboring differential levels of PhaZ. High-throughput phenotyping analyses of this collection of strains revealed significant changes in response to PHA cycle performance impacting cell number and size, PHA accumulation, and production of extracellular (R)-hydroxyalkanoic acids. To understand the metabolic changes at the system level due to PHA turnover, we contextualized these physiological data using the genome-scale metabolic model iJN1411. Model-based predictions suggest successive metabolic steady states during the growth curve and an important carbon flux rerouting driven by the activity of the PHA cycle. Overall, we demonstrate that modulating the activity of the PHA cycle gives us control over the carbon metabolism of P. putida, which in turn will give us the ability to tailor cellular mechanisms driving stress tolerance, e.g., defenses against oxidative stress, and any potential biotechnological applications.